The rage in Spain that turned into a political party..... PODEMOS??

Some time ago we were in the middle of a most serious economic crisis and people went on demonstrations and took the streets. Two years later we have a new political party whose origins were probably in these street protests. What is your opinion about the issue?


We are living hard times in Spain, which is also the name of a novel written by Charles Dickens. Here you have got an article to read about how the world sees all these street riots, but remember the case of the hoodies some time ago in London or the problems they had in France. 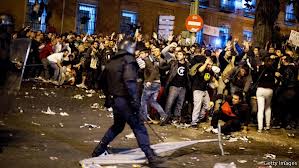 The rage in Spain