More than 50 years ago, John Fitzgerald Kennedy was killed supposedly by a man called Lee Harvey Oswald, who was later also murdered by Jack Ruby. What do you know about all this?

This is how the article in The Guardian starts: "Kennedy assassination documents are set to be released on Thursday...."  Here's the article and some others about the issue:

You can also have a look at this post:  JFK50


On the way to SELECTIVITY   >>>  VOCABULARY

1.   He introduced me to his fiancée before / after they got married.
2.   I caught a cold. I need some warm clothes / medicine.
3.   I hope he is willing to punish / help me.
4.   Sherry takes pride in her paintings. She always / never shows them to people.
5.   Mrs Smith gossips a lot about the neighbours / shops.
6.   A talent scout came to the performance looking for a new dancer / manager.
7.   They’re very wealthy, but they live in a huge / small house.
8.   Take your time. We’re leaving in a few hours / immediately.

3. PHRASAL VERBS   >>>   TO COME. Fill in the gaps with appropriate prepositions and write what they mean.


SELECTIVITY. Solutions to the exercises in the previous post: 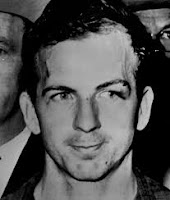