Do you fancy a second Bath for our VII Study trip to the British_Irish Isles???? 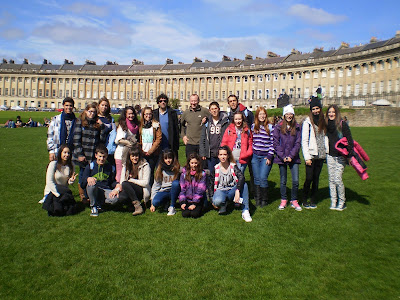 
Therefore, next Wednesday (16th March) during the break we are having a meeting to give you all the information. In this post you will be able to look through some of the things we did four years ago. And remember this is just a meeting to inform you. It doesn't compel you to do anything!!!!

Here are some of the posts in this blog related to the trip we did four years ago and which was our third experience:

And you can also have a look at:

Here's a listening exercise to do: Are you a foodie? (6 Minute English, BBC Learning English)


Prepositions of PLACE 👉 IN / ON / AT / BY 👈 Common English Grammar Mistakes

Some exercises connected with the section USE OF ENGLISH.

1. Read the following definition and try to guess the word it refers to:  “sequence of actions regularly followed”

2. Give one synonym for “PEACEFUL”.
3. Turn the following sentence into the passive voice:     Visitors find peace and joy at the monastery.

4. Join the following sentences using an appropriate linker (do not use AND or BUT). Make changes if necessary.                Lindsay is the eldest child. She has to look after the other children.


7. Complete the following sentence:   If the visitors wish…

8. Give one synonym for “QUIETLY” (adverb).
9. Give one word which has the following definition:   “person who speaks in representation of a group” (noun)


10. Turn the following sentence into reported speech. The director said: “We are very privileged to have nursed her.”


11. Join the following sentences using an appropriate linker (do not use AND or BUT). Make changes if necessary.      She lived for a long time. She had a whisky everyday.


12. Put the following words in the correct order to make a meaningful sentence.


The UFO enthusiast explained: “I’ve never known anything like it.”


The butcher exclaimed: “You can’t get these pies anywhere else in the universe!”

17. Fill in  the gap with a correct preposition.


18. Give a question for the underlined words.
People have been seeing strange objects in the sky for centuries.

1. scary, terrifying      2. to connect      3. Prince Kretzulesco said he had been considering leaving Germany the next year.    4. He would be received with open arms.    5. ill / sick    6. Where did Sally go last year?  7. if she had enough money to afford it    8. commonly, largely, normally (Example: It is commonly thought that people watching violent films get excited and might want to perform violent acts in real life.)  9. thought , behaviour  10. actress, producer   11. Violent games easily influence children.    12. a) there wouldn't be so many murders.    b) when you have to drive afterwards.    13. He was reading a book, whose characters were zombies.    14. disagree , hard

Another funny episode of John McEnroe talking about tennis in "The self-appointed Commissioner of Tennis":