Classes are over today, but what a day! 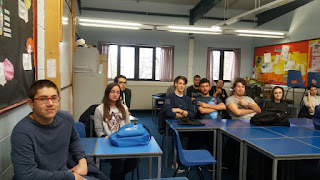 Again another sunny day with no rain at all! Yesterday the temperatures were a bit higher, but every time the wind blows, they go down again.

Today our students have a really hard ahead as they have classes both in the morning and the afternoon in a state secondary school, which is ten minutes' walk from Mackenzie School. They can see an example of how schools are organized and kept in Britain. 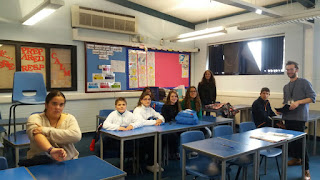 We have just had our packed lunch with our students after their morning classes. They are quite happy, but two of the girls have to move to another house because a relative of the host family is ill in hospital. Later they have confirmed us that they will share house with some of our students.  At least they are in the neighbourhood. The classes in the afternoon have been again at Mackenzie School.

Some good news about tomorrow >>> we'll just have to pay £3.56 each for the train tickets to Stirling.

After dinner we have met again to pop into the city centre so that they can see what it is like in the evenings with all the lights on. We were supposed to come back by 8, but in the end we have come back much later waiting for some girls that were shopping at Primark.


Remember that you can have a look at all the photos taken during our stay in Edinburgh clicking on this link:

And further information on our trip  >>>  English version   &    Spanish version